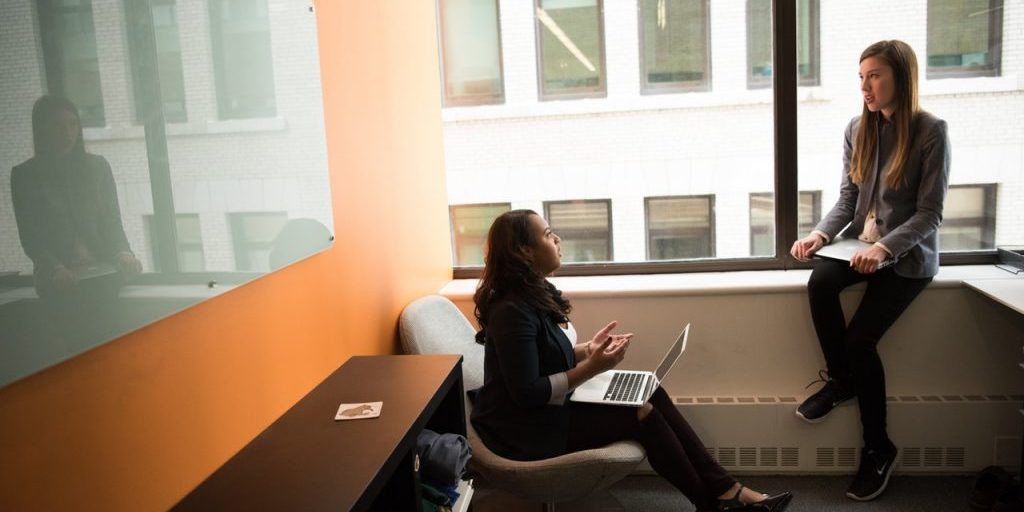 The walls are down, the barriers to communication swept aside. Some cheer about better teamwork, shorter distances to cover and an atmosphere of openness, while others grumble about noise, the loss of private space and an inability to concentrate. One thing is for certain: open office concepts have their strengths and weaknesses. Intelligent office layouts attempt to preserve the former and compensate for the latter. But however they look, the question of whether they function in real life hinges on how much attention is paid to personal space.

Let’s be honest: unlimited exposure is impossible. Sometimes – more often than you’d think – it’s necessary to draw the line. This can be a physical boundary, expressed verbally or made clear by non-verbal behaviour. The fact is, a closed door is almost always accepted as a boundary, but staring at a screen at a workstation in an open office space makes people seem available. Territory is endangered, and so is personal space.

Stay out of my space

Psychologists talk about “personal space” as an invisible zone, a kind of hypothetical spatial bubble that governs proxemic behaviour between interacting parties. Pushing into this “intimate sphere” is typically unwelcome and can be experienced as highly unpleasant. In our everyday lives, we keep the “necessary” distance automatically insofar as the situation allows it. The classic behaviour is easy to observe in public transportation, for example: first all of the free seating rows only have one person in them, and not until every row has an occupant will people sit next to each other.

Of course a number of factors determine the size of personal space, including the quality of the relationship between the interacting people. Clearly: strangers, business partners, friends and loved ones act within different distances to each other, which enables observers to see very clearly how close these people are. Individual personality attributes, as well as situational and cultural aspects, also determine the distance. North Americans and northern Europeans, for example, have larger personal space than do South Americans or southern Europeans. What one group experiences as pushy is normal for others, or “normal” behaviour can also be experienced as a rejection.

The size of personal space also depends on the environment in which the interaction takes place. If the room is especially large or small, people accept different distances. Interestingly, there is also a similar effect in “seemingly” large rooms, such as skyscrapers with an unobstructed view, where people need less personal space. The same applies to long thin rooms in comparison to square ones. The need for personal space has been proven to be greater in the middle of the room than in the corners. If there is space above – for example, under tall ceilings or the open sky – this reduces the amount of personal space that people need. People want more distance under lower ceilings. If someone is in an unfamiliar room, they also need more free space around them.

These sorts of facts are essential for room planners. And correspondingly, personal space is an important factor for desk dimensions, spacing and layouts. Normally we pay no notice of this, but when workstations and zones are calculated too tightly, people immediately feel uncomfortable – and this doesn’t exactly encourage motivation and productivity.

Of course, the same thing can happen if space is properly allocated but colleagues and managers don’t follow a couple of absolutely mandatory rules of conduct that are especially important in an open office. Crossing through a space that is obviously personal in character just because the path is a bit shorter is a classic no-go, and so is telling funny holiday stories right next to someone else’s workstation. It’s also easy to create some enemies by being overly curious, looking over a colleague’s shoulder, maybe even offering unsolicited advice or creeping up behind someone.

Not to be underestimated: smells & sounds

A violation of personal space need not always be caused by physical intrusion; intense perfumes, a mid-day meat loaf sandwich, or loud talking can also be equally unpleasant. For the latter case, occupational psychologists recommend a solution that at first sounds like a paradox: increase the noise levels. This doesn’t mean to begin speaking just as loud, or to turn the radio all the way up, but rather to create a background noise so that individual voices no longer stand out so much.

For example, when the software company Autodesk moved into an open office, they installed a so-called pink noise system for precisely this reason. A soft noise was transmitted via speakers in the frequency range of the human voice. The system ran for three months without employees noticing it, and then it was turned off. The consequence: several employees complained. They didn’t know what had changed, but they knew that something wasn’t right. They were distracted by discussions that were taking place almost 20 metres away. When the system was on, discussions within a radius of just five metres were absorbed in the general background noise and perceived as significantly less disruptive.

As important as communication is – constant physical availability can create problems. Researchers at the University of California conducted a study during the last ten years that surveyed over 65,000 people in North America, Europe, Africa and Australia. They found that in general more than half of all employees complain about too little private space in open offices. Regardless, a professional solution has to be found for open offices due to the fact that certain tasks, meetings or conference calls require a certain measure of discretion and privacy.

The good news: we recognise the problem. Well enough, you may say, but that was the case ten years ago. True, but now we have solutions that can be applied in more diverse and more individualised ways. Privacy areas, recreation areas, think tanks, phone booths – modern office planning has come a long way, and advanced office furnishers now offer a rich repertoire of formal and informal options for privacy. Which means that room conditions can be managed. So the only ones who can still intrude into our space now are the Space Invaders!

How Lighting Affects the Productivity of Your Workers
November 19, 2019

FacebookTwitterYouTubeLinkedin
Any Questions?
To speak to your WorkPlace Solutions Manager, Please fill out the form below and they will contact you shortly.
Recent Posts
Go to Top